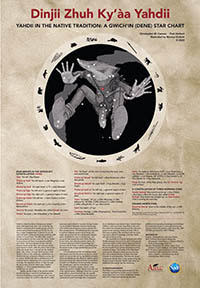 Gwich’in star chart is first of its kind

The Alaska Native Language Center has published a star chart, based on traditional Gwich’in knowledge, that was produced by researchers Christopher Cannon and Paul Herbert, with illustrator Mareca Guthrie.

Dinjii Zhuh K’yàa Yahdii / Yahdii in the Native Tradition: A Gwich’in (Dene) Star Chart is a product of more than a decade of research with Gwich’in traditional knowledge bearers and the first-ever star chart for a Northern Dene language. As a whole-sky constellation, the chart depicts the spirit of the ancient Gwich’in Traveler-Transformer figure, Ch’iteehàawkaii, arched over Earth as a teacher, protector, ally, and the embodiment of the world who continues to travel overhead on his snow-packed Milky Way trail.